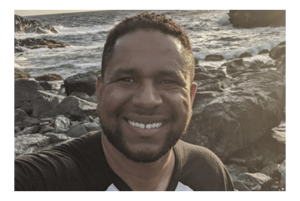 Adrian DeBarros, author of A Poet and his Errant Pen, started out life a baby…yeah a baby, what!? Were you hoping for some monumental and dramatic introduction? Okay, okay…

He started life as a class clown; he loved the laughter of his classmates. His entertaining demeanor even got him banned from school plays and field days, poor little kiddo. As schooling went on, he wised-up and quieted down for conformity’s sake.

He then picked up a pen and treated it like his best friend and nemesis. Happily and angrily stroking pages faster and faster until a new dimension opened up.

Well, this new dimension did open up for him; many years later he now writes poetry and performs rhyming comedy. In his book you’ll find expressions of humorous encouragement, to shocking moments of “Did I really just read that?”

Adrian received his first honorable mention in poetry at the age of 17 and tried out for the Denver Nuggets in the early 2000s during an open tryout. He is a huge proponent of MOOCs (Massive Open Online Courses). Within the past four years, he’s completed online courses to strengthen his writing, learn web development, strengthen his graphic design, and problem solving more effectively.

When Adrian is not at the pad and pen, he’s usually building gaming computers, on the basketball court, reading, shooting pool, learning how to rap or laying it down at yoga.