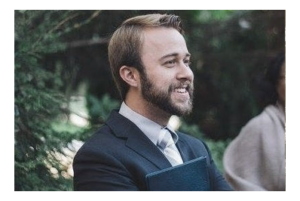 Brad Perry is the author of a short story collection called Strawberry Hill, and is an English teacher originally from the mighty mitten of Michigan. He wrote his first stories in the 3rd grade, which were shameless rip-offs of popular horror movies. Since those days of crayon-composed carnage, his style has fortunately changed.

While an English major at Central Michigan University, Brad won the Gow Litzengurger Award for Undergraduate Fiction for his story “Itching and Echoes,” so he began writing more seriously. Although he is now a teacher, he still spends lots of free time writing, revising, and querying.

His stories run the gamut from the realistic to the surreal, emphasizing both humanity and imagination. Tales circle around failed writers and forgotten soldiers, insanity and nostalgia, returning home and going to Hell. His work has been published in Pidgeonholes, Page & Spine, and Channillo.

Brad currently lives in Arizona with his awesome wife, Megan. He’s obsessed with literature, film, and music, so he blogs about them when he can. You can also follow him on twitter, where you’ll find, among other things, lots of quotes from The Simpsons.