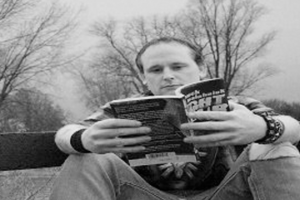 Cameron Grace is author of Wood to Burn. He was born in Gretton, Northamptonshire, England. He became an English and Creative Writing Student in 2013, attending the University of Northampton where he co-founded the literature society ‘The Rumour Quill’.

Since starting his degree, Cameron won the best short story competition for My Student Style, a webzine for which he would later become Editor in Chief. Entering his final year, Cameron is now Editor in Chief for Under The Fable magazine.

His works have been published in The Bitchin’ Kitsch, VoiceIn Journal, Carnival Lit Mag, Under The Fable, and he has written for Radio Drama company Small Start Audio.

Currently, he is working on completing his degree, writing a collection of science fiction poetry, and a novel. If you don’t find him with a pen in his hand, then you can probably hear him hammering at his guitar, or find him on his Xbox.